In analogy to their electronic counterparts, all-optical switches and transistors are required as basic building blocks for both classical and quantum optical information processing [1,2]. Reaching the fundamental limit of such devices, where a single gate photon modifies the transmission or phase accumulation of multiple source photons, requires strong effective interaction between individual photons. Engineering sufficiently strong optical nonlinearities to facilitate photon-photon interaction is one of the key goals of modern optics. Immense progress towards this goal has been made in a variety of systems in recent years. Most prominent so far are cavity QED experiments where a high finesse resonator enhances the interaction between light and atoms [3,4] or artificial atoms [5,6].

In this work, we demonstrate a free-space all-optical transistor operating on the single photon level using a novel approach to realize effective photon-photon interaction [7], which is based on mapping the strong interaction of Rydberg atoms [8] onto slowly travelling photons using electromagnetically induced transparency [9]. This technique has already been used to demonstrate highly efficient single-photon generation [10], attractive interaction between single photons [11], entanglement generation between light and atomic excitations [12], and most recently single-photon all-optical switching [13].

However, demonstration of amplification, that is, controlling many photons with a single one, has so far only been achieved in a cavity QED setup [14]. Gain > 1 is one of the key properties of the electric transistor that lies at the heart of its countless applications. In our experiment, we demonstrate an all-optical transistor with optical gain G > 10 [15]. Similar results have been obtained by the group of G. Rempe, their results have been published in parallel to ours [16].

The level scheme and geometry of our transistor are illustrated in Fig. 1 (a, b). Photons in the weak gate pulse are stored as Rydberg excitations in an atomic ensemble by coupling the ground state |g> to the Rydberg state |rg> via the strong gate control field. After this storage process, a second weak pulse, the source pulse, is sent through the medium at reduced velocity due to EIT provided by the source control laser coupling to the Rydberg state |rs>. 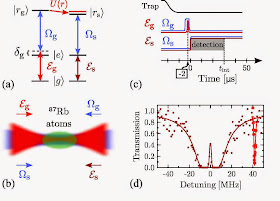 FIG. 1: (a) Level scheme, (b) simplified schematic, and (c) pulse sequence of our all-optical transistor. (d) The absorption spectrum for the source field (dots) over the full intermediate state absorption valley shows the EIT window on resonance; the gate field spectrum (circles) is taken around the two-photon resonance at Δ = 40 MHz. The solid lines are fits to the EIT spectra.

In the absence of the gate pulse, source photons travel through the transparent medium (Fig. 1d). If a gate photon has been stored, the strong interaction between the two Rydberg states destroys the EIT condition for the source photons in the medium, resulting in absorption. To observe this conditional switching, we record the number of transmitted source photons in a time interval tint after the gate excitation pulse, cf. Fig. 1 (c). For the experimental realization of this scheme, we prepare 2.5 X 104 87Rb atoms at a temperature of T = 40 µK in an optical dipole trap. All four lasers required for the transistor scheme are focused into this medium along a single direction (Fig. 1b). The weak gate and source pulses are recorded on single photon counters. 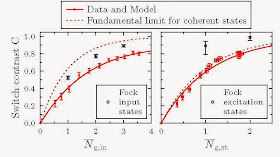 FIG. 2: Switch contrast (red) as function of (a) mean number of incident gate photons and (b) mean number of stored photons. The dashed line indicates the fundamental limit set by the photon statistics of the coherent gate input. Black data points represent the calculated switch contrast expected for (a) one-, two- and three-photon Fock input states or (b) deterministic single and two stored gate excitations.

Next, we investigate how many source photons can be switched by our system. To quantify the gate-induced change in source transmission, we consider the optical gain
G = Ns,outno gate - Ns,outwith gate. In Fig. 3 (a), we plot the measured optical gain for an average input of gate photons Ng,in = 0.75(3). For this gate input, we observe a maximum optical gain G(Ng,in = 0.75) = 10(1). Further increase of the optical gain at fixed gate input is limited by the self-blockade of the source beam, which results in nonlinear source transmission even in the absence of gate photons [7, 17]. The red (blue) data points in Fig. 3 (b) show the source photon transfer function when Ng,in = 0 (Ng,in = 0.75(3)). For the given integration time the source transmission saturates at 46 photons, which limits the maximum gain we can observe. On the other hand, the self-nonlinearity of the source light does not affect the transistor performance, we observe a constant switch contrast of C = 0.22(3), consistent with the mean gate input, even for incoming source photons up to ~250. Based on this robustness, we can again extrapolate the transistor performance for a true single photon gate input (Fig. 3 green line) and a single stored excitation (grey line). For a single excitation, we calculate the maximally achievable optical gain of our current system as Gst = 28(2).

In summary, we have demonstrated a free-space single photon transistor based on two-color Rydberg interaction. Further improvements of our system could enable a high optical gain, high efficiency optical transistor, so far only realized in a cavity QED setup [14]. One approach to overcome the self-nonlinearity of the source photons has already been demonstrated by the Rempe group, who employ a two-color Förster resonance in their transistor scheme [16].

A key step towards turning our transistor into device which can perform quantum operations on single or few photons is the retrieval of gate photon(s) after the switch process, which could enable multi-photon entanglement protocols and creation of non-classical light-states with large photon numbers. Finally, our system is a highly sensitive probe for studying Rydberg interaction on the few-particle level [18]. In particular, the combination of two independently controlled Rydberg-EIT schemes enables novel fields of study, such as the interplay between slow light propagation and Rydberg exchange interaction [19], or realization of a two-photon phase gate based on Rydberg-polariton collision [20].